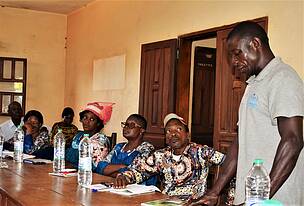 The current online contest focuses on climate resilient cocoa production that have little or no impact on the forest, protects wildlife and procure benefits for indigenous and local communities in the Southeast of Cameroon. Going by the 12 projects submitted, local actors expressed the desire to regenerate ageing farms, create plant nurseries, reconvert existing farms for cocoa production, produce high quality cocoa and build relationship with long term credible financial partners.

During a pre-selection exercise organized in August in Yokadouma and Ngoyla, municipalities in eastern Cameroon, local actors representing women associations, indigenous Baka groups, cooperatives and youths took turns to defend their projects before a jury comprising members of the ministries of Forestry and Wildlife, Agriculture and State-run micro-finance institution (CAMPOST) and WWF.

“We wish to regenerate existing ageing farms, increase our production thereby increasing our revenue from the sale of cocoa. We will also transform part of our cocoa to add value to it,” stated Mrs. Modo Anne-Marie, President of the Network of Women Associations of Yokadouma, (RAFAYOK) while defending her project.

“Our project will positively impact particularly women and vulnerable groups like the Baka and the elderly by creating employment, generating revenues and providing for household needs,” she explained.

In southeast Cameroon cocoa is considered “the green gold” and constitutes a steady source of income for local people living within the Cameroon segment of the Trinational Dja-Odzala-Minkebe (TRIDOM) landscape. Despite the huge potentials for substantial income generation from cocoa production, local actors involved in the trade are still to derive significant benefit from it.

Following an initial consultation with local government and non-government actors within the TRIDOM Cameroon landscape, WWF facilitated the putting in place of multi-stakeholder platforms in Yokadouma and Ngoyla, to ease exchange and ensure effective implementation championed by the community actors.

“While the community actors have shown a clear desire and willingness to increase their production and income base, they need support and follow up in developing veritable business plans and ensuring effective implementation. WWF will accompany them in the process to ensure positive outcomes,” states Roberty Essama, WWF Business and Industries Coordinator.

This is one of the key steps in the five-year MoMo4C Project that aims to improve the revenue base and living conditions of local communities as well as mitigate the effects of climate change in the TRIDOM Cameroon Landscape. 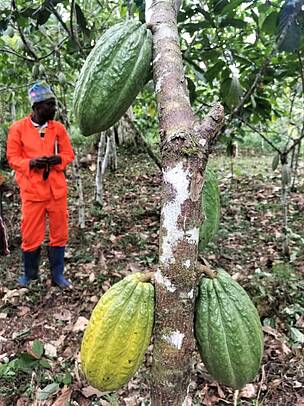 Cocoa can be cultivated with limited negative impact on the environment
© Fidelis Manga/WWF Enlarge
Like this article?