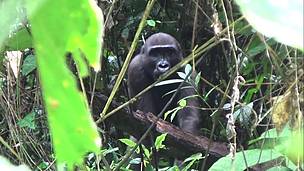 A target gorilla group under habituation in the Campo habituation site is close to the stage of tolerance to human presence
© WWF Campo Maan
Standing seven meters away from them, the gorillas in Campo Ma’an National Park in the South Region of Cameroon seemed more tolerant, oblivious of the very close human presence. As Michael Kuwong, WWF veterinarian for Campo Ma’an and his team of trackers stooped to catch a glimpse of them, the dominant male peered through the thickets and their eyes met.

“I winked but he did not wink back. Instead, a female gorilla waddled from behind and stood near the male’s left shoulder steering at us,” Kuwong says. After five minutes of steering and winking, the gorillas decided to ignore Kuwong and started foraging for food, pulling off herbs and guiding leaves with their fingers into their mouths. They ate and frolic, then waddled away 20 minutes after, time enough for Kuwong to take some video and photo shots.

According to the gorilla habituation team, this behavior betokens outstanding progress in the habituation process. “After 7 years of data collection, results show that the target gorilla group under habituation known as “Akiba” is close to the stage of tolerance to human presence,” says Eno-Nku Manasseh, WWF Kudu-Zombo project executant. “Behavior recording indicated that in 60% cases, gorillas manifested curiosity and ignorance as opposed to aggression.

Field teams were able to take video footages and still pictures as long as 8 minutes at a distance less than 10 meters,” Eno-Nku says.  “This behavior sustained over a period of six to twelve months coupled with protection and assurance of their health, these gorillas will be ready for the launching of gorilla observation tourism,” He states.

In 2011, WWF started the process for gorilla habituation in Campo Ma’an National Park. Going by a 2014 wildlife survey result, Campo Ma’an has a relatively stable gorilla population numbering over 800 with 54% in Dipikar Island, which is the focused site for the habituation process. As the team hiked back to their base camp, they encountered several other groups of gorillas in the thickets and in the trees. “We marveled at the acrobatic display of a couple of gorillas on the tree branches,” says Kuwong.

The Campo habituation team has been tracking a group of 32 gorillas since 2015 when the contact phase started. The remarkable progress registered so far in 2018, has enhanced hope for gorilla observation tourism, first of its kind in Cameroon. Upon completion the habituation project is expected to boost ecotourism in order to generate sorely needed income for the communities and the State of Cameroon.

However, for the project to succeed more effort is needed to protect the home range of the gorilla, put in place a functional gorilla-human health component, sustainable funding and an appropriate government policy framework (public -private partnership) for the management of the gorilla observation ecotourism program.
The German Federal Ministry of Economic Cooperation, currently funds the gorilla habituation project through the BENGO project. 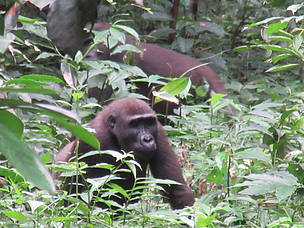 gorillas manifested curiosity and ignorance as opposed to aggression.
© WWF Campo Maan Enlarge
Like this article?