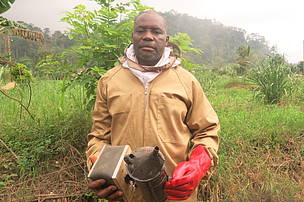 Mr Etape Moses determined to own a large bee farm
© Janet Mukoko/WWF
Mr Etape Moses Nkwelle, 53, from Kupe village, Tombel Subdivision, Southwest Region has abandoned hunting to embrace bee farming after 39 years. “My step-father introduced me to hunting when I was 14. We hunted day and night and killed all types of animals - big, small, pregnant,” Nkwelle says. To him, hunting was a job he enjoyed and carried out with much passion.

For Nkwelle, every hunting day was a different experience. Some days were fruitful with enormous catch, while others were fruitless. As a regular hunter, he was frequently injured, attacked by wild animals, and even stunk by poisonous insects and snakes. There were days his hunting expedition started at 7.a.m and ended at 7.p.m.  Sometimes he set his traps during the day and returned to the forest at night between 8.p.m. and 10p.m. to check if he made any catch. During that time, he also hunted nocturnal animals. “It is a very tedious job. Sometimes I spent the whole day and night in the forest without food. Upon returning home, I felt very tired with bruises all over my body,” Nkwelle says. “I lost so much weight and always looked sick and stressed. But I had to be steadfast because that was the only source of livelihood for my family,” Nkwelle adds.

During his many hours in the forest, Nkwelle usually encountered bees clustered in trees and used the traditional burning method to harvest honey, though usually in very small quantities. That triggered his love for honey extraction, alongside hunting.  He had no idea what tools to use and so bees always stung him.

Everything changed in December 2018, when information reached Nkwelle’s village that the Tombel Conservation and Development Cooperative (TOCODEC) was organising a training on bee farming targeting hunters who are willing to abandon the trade. “I immediately applied for the training and signed an undertaking never to return to hunting. This was what qualified me to be part of the training,” says Nkwelle.

This father of four children was thus amongst the first 10 hunters trained on bee farming and offered start-up equipment comprising a beehive, bee suit, veil, smokers, a pair of gloves and boot by TOCODEC. “Seeing the hives colonising after few days, I was motivated and decided to personally produce and install four more hives. I am anxiously waiting for my first harvest,” he says excitedly.  He hopes to have 10 beehives and even more in the near future.

Nkwelle is encouraging friends still hunting to join him for a free capacity building on bee farming. “Each time I meet my friends I tell them the huge benefits of bee farming as opposed to hunting. I have promised to train them on bee farming for free if they sign the undertaking with their chief never to hunt again,” he says. 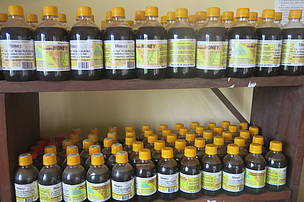 A cross section of TOCODEC's honey shop in Tombel
© Janet Mukoko/WWF Enlarge
Like this article?