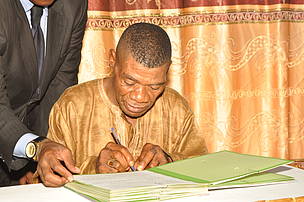 Ernest Adjina signing on behalf of Baka
© Chemete Pierre
Yaounde, Cameroon; Tuesday, 26 February 2019: After years of dialogue, Cameroon government has signed an agreement with Baka indigenous forest people granting the latter greater access rights and joint management of some national parks in the east of the country.

Cameroon’s Ministry of Forestry and Wildlife (MINFOF) and Baka communities under the banner of their association (ASBABUK) signed a Memorandum of Understanding in the city of Bertoua in the east of Cameroon. The government commits in the MoU to facilitate Baka access to resources use zones within Lobeke, Boumba-Bek and Nki national parks. The government will also tap into Baka traditional knowledge in the management of the parks.

Baka on their part committed to ensuring sustainable use of natural resources in the parks, denounce perpetrators of illegal activities, and participate in strategic meetings and communication activities linked to the management of the parks.

“We are very happy this MoU is finally a reality. We have waited for this day for so many years,” states Adjina Ernest, President of ASBABUK. “We now have greater access to natural resources and can also perform our rites,” Adjina says.

While signing the MoU, Cameroon’s Minister of Forestry and Wildlife, Jules Doret Ndongo said, “this is testimony of the government’s commitment to promote participatory management of natural resources and access rights of local communities, especially indigenous people”.

WWF Cameroon welcomed the signing of the agreement and pledged to support its implementation
“WWF is ready to work with other partners to ensure that the MoU enhances Baka’s access to resources of protected areas and improve synergy between indigenous people and Cameroon’s Forest and Wildlife administration,” says Clotilde Ngomba, WWF Cameroon Country Director.

WWF has supported similar agreement between with the Bagyeli community around Campo Ma’an National Park in the south of the country and the Baka communities living around the Ngoyla Wildlife Reserve in the east.
Indigenous communities like the Baka have lived in and around the forests of Southeast Cameroon for centuries, depending on nature for their livelihoods. For generations, these forests have been the place where their children learn, train and grow. Forests hold a special place in the Baka’s hearts and cultures.

Considering the increasing pressure Cameroon’s forests are facing from unsustainable development, expansion of commercial agriculture, mining and wildlife crime, creating protected areas is one way the government aims to preserve the country’s incredible forests and biodiversity. Yet in doing so, ensuring access for the Baka and other indigenous communities, who rely on these resources for their well-being, has been a challenge. 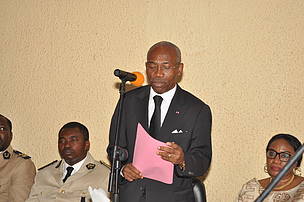 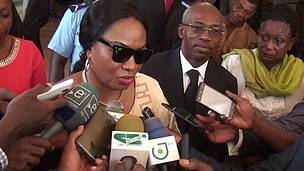 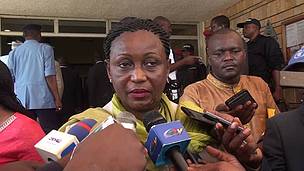 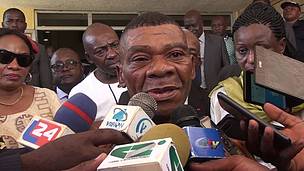 Baka representative gives his impression to the press
© Ernest Sumelong/WWF Enlarge
Like this article?