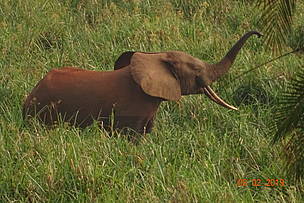 The census, conducted between July and December 2018 sought to know the dynamics of wildlife populations and human pressure inside the park and its surrounding zone. The results indicate an estimated elephant population size of 3,500 individuals, down from over 4200 individuals in the 2015 survey estimate. This decrease is attributed mostly to poaching for ivory trade. However, the elephant population remained relatively stable inside the park between these periods with slight decrease of 6.7% in the mean estimate from 1029 in the year 2015 to 960 in 2018.

WWF and the conservation service of Lobeke conducted the inventory with the financial support of the Tri-National de la Sangha Foundation (FTNS) and and US Fish and Wildlife Service (USFWS-Wildlife without Borders). The inventory team covered on foot, a distance of 1800km of which 744km are line transects systematically distributed throughout the park and the management units located in its periphery, covering a total area of 934 884 ha.

Meanwhile, great ape population size is estimated at some 15000 individuals consisting of 83.5% of gorillas and 16.5% of chimpanzees, witnessing a slight increase between 2015 and 2018. This stability is due to the fact that great apes are not among the main poaching targets in Southeast Cameroon because of local customs. The presence of 08 monkey species is confirmed during the inventory; putty-nosed monkey, grey-cheeked mangabey and the colobus guereza being the most abundant species.

A large population of duikers and other ungulates of 188,190 individuals is estimated in the study area with 79,229 individuals in Lobeke NP. Three species of pangolins were also detected during the survey, with the giant pangolin being the most abundant species.

“It is comforting to know that the decline rate of species like the elephant has slowed down. However, poaching pressure is still very high and as such we need to urgently improve our anti-poaching strategy in the park and its periphery if we hope to stop the haemorrhage,” states Dr Zacharie Nzooh, WWF Cameroon Biomonitoring Coordinator.

The result of the study was validated during a workshop organised in Bertoua on June 7, involving representatives of the central and decentralised services of the Ministry of Forestry and Wildlife (MINFOF), government technical and financial partners (WWF, ZSL, TNS Foundation and WCS), and logging companies (SEFAC and CTSC).

To ensure effective management and reduce human pressure on wildlife, participants at the validation workshop recommended a review of the functioning of the Technical Operational Unit of the South East (UTO-Sud-Est) and concertation platforms between the different actors. They also recommended a public-private partnership governance model for Lobeke. 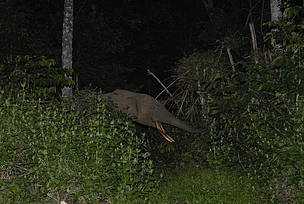 Anti-poaching strategy in the park has to improve in order to keep this population stable
© David Rouge Enlarge
Like this article?