After Accord with Cameroon Gov’t: Baka harvest, carry out customary activities inside National Parks | WWF Cameroon

After Accord with Cameroon Gov’t: Baka harvest, carry out customary activities inside National Parks 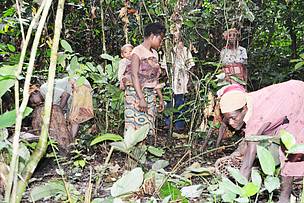 Baka women gathering non timber forest products inside Lobeke National Park
© Ernest Sumelong/WWF
Ever since indigenous Baka people signed an agreement with Cameroon’s Ministry of Forests and Wildlife, granting them more access into some protected areas in the Southeast of Cameroon, many have been visiting the parks to harvest non timber forest products and carry out customary rites.

Cameroon’s Ministry of Forestry and Wildlife (MINFOF) and Baka communities under the banner of their association (ASBABUK) signed a Memorandum of Understanding (MoU) in the city of Bertoua in the east of the country in February. The government committed in the MoU to facilitate Baka access to resources use zones within Lobeke, Boumba-Bek and Nki national parks. The government would also tap into Baka traditional knowledge in the management of the parks.  Baka committed to ensuring sustainable use of natural resources in the parks, denounce perpetrators of illegal activities and participate in planning meetings and communication activities linked to the management of the parks.

Thanks to the agreement seventy-one-year old Zamoutoum Michel and his family of 17 members have found their soul deep in the forest in eastern Cameroon as they freely roam gathering bush mangoes, harvesting wild yams and barks of trees for medicine. “We have been going about our activities unperturbed and we feel at home here. We will stay until we have gathered enough bush mangoes we can sell and purchase school needs for our children and basic household needs,” says Zamoutoum.

The Baka family has temporarily moved from their Zega Village into Lobeke National Park. Here, they have built a camp of six mogoulous (Baka doom-shaped huts constructed with sticks and leaves of trees). The camp is erected where it is easy for them to find mango trees and other non-timber forest products. They stay here for up to three months collecting and processing bush mango as much as they can. Bush mango is one of the forest products that occasion the seasonal movements of Baka into the forest.

For Zamoutoum, going into the forest is like going to the hospital to receive treatment from common diseases they suffer while in the village. “In the village, we take ill most of the time, but while in the forest we feel healed. We have everything we need here, particularly medicine,” he explains.

Like Zamoutoumn, many Baka families have relocated to the forest at this time. On August 9, the day set aside for indigenous peoples, only a handful of Baka participated in the event organised in Moloundou. Most of them were in the forest, as it is the season for bush mango harvest.

“This agreement has further opened the forest to us and we are now free to carry out our activities as before,” says Ernest Adjina, President of Baka Association (ASBABUK). “With the support of WWF, we have carried out sensitisation in most Baka villages around the parks, telling our brothers they are free to go into the parks and carry out their activities. This has motivated many Baka families to go into the forest,” he adds.

Moise Kono, WWF Indigenous Peoples Coordinator says, “as stewards of the forest, Baka’s activities are traditional and do not harm biodiversity. This is indeed a win-win situation,” he adds. 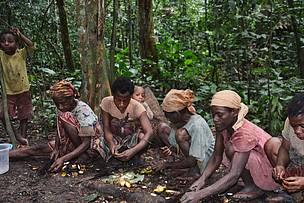