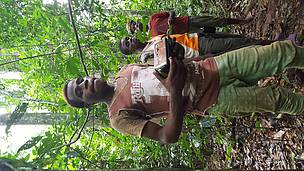 The landscape also presents unique opportunities for conservation and human wellbeing. They include huge biodiversity potentials, the largest tropical forest under FSC certification in the world and indigenous communities whose role is vital in the sustainable management of the forest.

These challenges are at the centre of WWF’s work in the area. A new TRIDOM initiative seeks to address the interests of people and conservation. The TRIDOM Strategy is built on five pillars; supporting communities to access natural resources, upholding the rights of indigenous peoples, ensuring sustainable food production, fostering a robust climate action and conserving the landscape’s rich biodiversity. Achieving these lofty goals will entail mobilizing government partners, CSOs, corporate bodies and communities to work together.
In the Cameroon segment of TRIDOM, WWF is supporting local initiatives related to: Within the context of uniting voices and views for a better deal for people and nature in the Congo Basin, four strategic meetings involving key WWF actors in the TRIDOM landscape held in Yaounde and Douala in October and November 2019. They focused on Climate Action, Wildlife, Forest and Communication. They were the Climate Change Adaptation Workshop, Central Africa Communicators Workshop, Central Africa Wildlife Crime Hub Meeting and WWF Central Africa Forest Week Annual Meeting. Key actors from Cameroon, Gabon, the Republic of Congo, Central Africa Republic and the Democratic Republic of Congo discussed the TRIDOM Initiative, the Forest and Wildlife Strategies and the TRIDOM Communication Plan.
«Quiet revolution» to protect elephants, gorillas for wellbeing of People and Nature
In the small district of Ngoyla that harbours the pristine Nki National Park and the Ngoyla Wildlife Reserve in eastern Cameroon, a quiet revolution is taking place. Unlike in the years of yore, when rangers (eco-guards) had to go it alone to stop poachers from decimating iconic wildlife species like elephants, local people are picking up the gauntlet.  They have grouped into association to denounce and engage actions against poachers to obtain compensation for civil damages in court.
“We must do whatever it takes to protect our wildlife and biodiversity for our wellbeing and that of our children,” says Sodja Denis Achille, coordinator of an association called GIC CODENZOP that is helping to stem poaching of elephants and gorillas in the Southeast of Cameroon.

GIC CODENZOP is one of four associations in Southeast Cameroon supported by WWF to fight against poaching, in a region that has witnessed alarming decline of about 60% of elephants in the last 10 years.  “We get more and more restive as we witness the massive decline of wildlife and biodiversity loss,” Sodja continues. “Since we swung into action in May this year, we have been to over 36 villages and sensitized 410 people on the urgency to stand up against poachers,” he reveals during a meeting with a visiting WWF team including Stephane Rinquet from WWF France.

“We have created three units to effectively reach out to the remotest areas in this wholly inaccessible landscape,” Sodja adds. However, GIC CODENZOP faces several challenges including communicating with the different units for prompt action. “Transport difficulties is one of our biggest challenges. Sometimes the roads are wholly impassable, we need bikes to move to the different units and telephones to promptly contact members in the field,” members of GIC CODENZOP chorused during a meeting with the WWF team in Ngoyla.

The project aims to increase the involvement and commitment of local communities living in the Cameroon segment of the Tri-National Dja-Odzala-Minkebe (TRIDOM) trans-border conservation landscape in the fight against wildlife crime. This will be done through legal support to enable the communities to appear as civil claimants in wildlife cases before competent courts and seek damages for prejudice suffered from poaching.
Stephane Rinquet, Head of Wildlife Trade Program at WWF France, thinks local communities are gradually getting at it. “Despite the enormous challenges they face, I see a people determined to take on poachers. They are now organised, and well structured,” states Stephane.