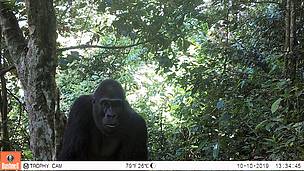 Youmbi is situated in the south of Nki on the Cameroonian border with the Republic of Congo and is one of three forest clearings being monitored for wildlife activities in Boumba Bek and Nki National Parks in TRIDOM Cameroon landscape. A semi-flooded clearing, Youmbi has a strategic geographical location; seated on the edge of the Dja River close to Nki and Cholet Falls.

Poaching and eventual development of the Cholet Dam pose potential threat to this wildlife hotspot. Frequent wildlife presence in the clearing and its geographical position at the borders of Cameroon and Congo make it vulnerable to trans-border poaching. Signs of intensive poaching activities were visible in the area during a 2017 mission by an ETIC patrol team in Northern Congo that counted up to eight elephant carcasses.

Since then, the WWF Jengi TRIDOM Programme in collaboration with the Conservation Service of Nki National Park has deployed teams to protect the area. In 2018, WWF installed a semi-permanent surveillance system that has resulted in a considerable reduction in poaching.

“This clearing is of paramount importance to us and has become a high priority area of focus, despite our very limited resources,” states Gilles Etoga, WWF Cameroon Senior Policy and Conservation Coordinator.
“As can be seen from camera trap images, flagship species like elephants and gorillas visit the clearing during the day and at night. Youmbi is definitely where we need to focus attention,” Gilles explains.

Gorilla in the Youmbi Clearing
© Camera trap/WWF Enlarge
Like this article?