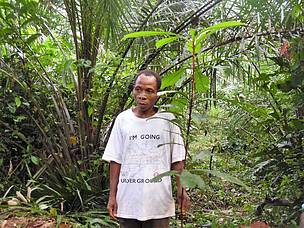 Baka man ad Moabi tree
© Ernest Sumelong/WWF
Talk of the Moabi plant (Baillonella toxisperma) and you would hear of a tree with many uses for local people, particularly indigenous Baka in southeast Cameroon. The moabi is important in economic, cultural and medicinal terms. It is one of the largest trees in the Congo Basin, growing to a height of 60 m and up to 5 m in diameter. In Cameroon, it grows mostly around Nki and Boumba Bek National Parks as well as the Dja Biosphere Reserve.

Moabi seeds contain highly valuable oil, which is used for cooking, traditional healing and cosmetics. Seeds from the fruit are used to make moabi oil, which sells for as much as 5000 francs CFA (US$ 10) per litre in big cities in Cameroon, constituting an important source of revenue for many households.

“For us, Baka, the moabi is a special tree in the forest. We eat its fruit and use its seeds to produce karate oil, which we sell and make money,” states David Mbangawi, a Baka man of Yenga village.
Given the huge demand for its timber, the moabi is highly threatened and faces extinction due to overexploitation. The plant is categorised as vulnerable in Cameroon in IUCN Red List. The main threat to the moabi is from logging, causing a decline in moabi trees over the years.

«In case of extinction, it will be a big loss for the local people given that it takes a very long time to produce fruits, say from above 50 years,» states Alphonse Ngniado, WWF Cameroon Forest Coordinator.

Since 2010, WWF has supported local communities to nurse and replant more than 2000 young moabi plants in their community forests. “We also planted some near Lobeke National Park where the moabi is not found. With the support of WWF, Baka in Yenga and Mambele villages have planted more than 1000 moabi plants to regenerate exploited portions of their community forest,” Ngniado explains.