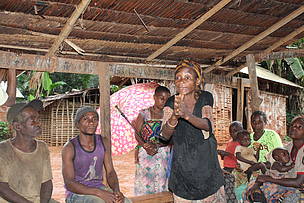 Yet, a study conducted by local NGOs; CEFAID and ASBAK with the support of WWF, showed that participation of Baka in decision-making related to natural resources management is still nowhere near as high as it should be. It identified weak capacity as one of the main challenges Baka leaders face in influencing decision-making processes.

“The biggest problem of Baka is their inability to talk in public and defend their position,,” states Yvette Mongondji, Baka Community Facilitator.

Conducted within the context of a joint WWF-Plan International Cameroon Project; “Rights, Resilience and sustainable future for Baka populations, their children and the forests of Cameroon”, the study suggests the identification and training of Baka leaders to enable them to better represent their communities.

In this context, Baka Association (ASBAK) and CEFAID with the support of WWF organized a capacity building workshop for Baka leaders on September 6 and 7 in Abong Mbang in the East Region of Cameroon, focused on sustainable development, team building, communication and leadership.

“This training is an important step in empowering Baka to raise their voice on decisions related to natural resources in favour of Baka. It is for us to act when time comes,” Mongondji says.