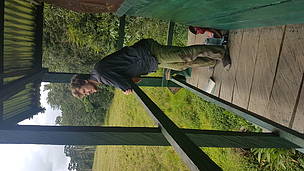 Keon hopes the elephants will waddle in soon
© Modeste
Koen Brouwer, a Masters graduate in Ecology from Groningen University, Netherlands, is just back from hiking to Ikwah forest clearing in Nki National park in eastern Cameroon. Koen joined the WWF Jengi TRIDOM biomonitoring team to observe wildlife dynamics in one of the biggest forest clearings in the Trinational Dja-Odzala-Mikebe (TRIDOM) landscape (Cameroon, Gabon and the Republic of Congo). He describes the trip (during which he came across gorillas, sitatungas, crocodile, buffaloes and monkeys) as a lifetime experience.

Koen’s trip to Ikwah started on October 20. “In the morning we left Ngoyla by car, picking up members of our team on the way. In the afternoon we reached our destination, the site where the previous team was waiting to be picked up to go back to Ngoyla.

“The next day we started our march through the jungle to our base at Ikwah. For two days we walked through beautiful scenery, even crossing a river over a tree log. But walking through the forest is very tiring and I was exhausted when we finally reached the base where we could rest!,» he states.

Every day for the next two weeks, the team would walk two kilometres to the watchtower on the edge of the clearing. Here they kept track of the animals we saw and heard. «We observed many species in the clearing; sitatungas, a crocodile, buffalos and twice a gorilla. The gorilla made a great impression. It looks so human! In the trees around the clearing there were often smaller monkeys (mostly grey-cheeked mangabey, black colobus or greater spot-nosed monkey) and one time a chimpanzee in the trees behind the tower, very nice to see,» he enthuses.

«On the second and on the final day in Ikwah we walked around the clearing to check if the camera traps were functioning and to collect camera data. During this walk we found tracks of chimpanzees, gorillas, panthers and elephants! Eventually, it was time to return to Ngoyla,» Koen adds.

«The way back was quicker and easier with less baggage. Ikwah was an experience that I will remember for the rest of my life!”

Keon hopes the elephants will waddle in soon
© Modeste Enlarge
Like this article?