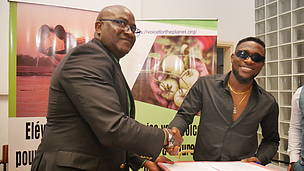 A cream of very popular young Cameroonian artists has joint forces with the World Wide Fund for Nature (WWF) to raise their voices for the planet and champion calls for a New Deal for Nature and People.
The award winning artists, including Daphne, Mr. Leo, Salatiel and movie actress Laura Onyama, signed an engagement letter with WWF on Wednesday, August 12, 2020 pledging to put their hearts and souls to save nature, humanity’s life support system.

This unprecedented commitment comes at a time our natural world is in crisis. Human activities including agriculture, logging, infrastructure development, are destabilizing our climate and destroying nature at a rate much faster than it can replenish itself. The world has lost 60 percent of its biodiversity in just 40 years. Some 1,000,000 species are under threat of extinction in the next decade, and our footprint is far greater than the planet can sustain.

WWF and partners are calling for a New Deal for Nature and People which will be reflected in a strong decision made by Heads of State, to halt and reverse the catastrophic loss of biodiversity and put nature on a path to recovery by 2030.

The artists are ready to give their hearts and time to make this happen. Hear Daphne: “From childhood I have always had a passion for wildlife. I grew up in Buea, Southwest Region of Cameroon where we used to see elephants filing up on the mountain top in the moonlit night,” the artist, who has won several awards said. “WWF has given me an opportunity to raise my voice for wildlife, for which I have very strong passion,” she says.
As for Mr. Leo who, besides being an award winning artist, is “a passionate farmer and livestock breeder”, practising agriculture the sustainable way will serve humanity’s need while protecting the planet.

The artists say they want to preach by example. Salatiel, who recently featured in a song with artist Beyonce, says they are ready to lead in eco-friendly projects that are beneficial to both people and nature. “As artists, the best way to talk about something is by doing it. We can initiate projects that we can showcase as blue print to encourage our fans to adhere to sustainable practices to safeguard nature,” he states.

“This is the beginning of a long artistic journey to rally support for the protection of nature and humanity,” says Gilles Etoga, interim Conservation Director for WWF-Cameroon. “We expect these very talented artists to mobilise youths to influence decision makers to take ambitions and concrete action to secure a nature positive world,” he says. 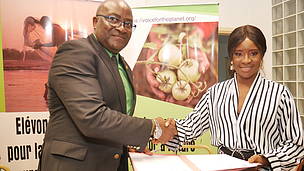 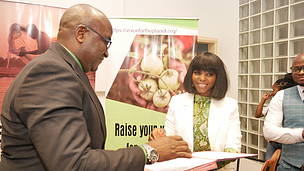 Daphne says her passion for wildlife has been since childhood
© WWFCameroon Enlarge
Like this article?